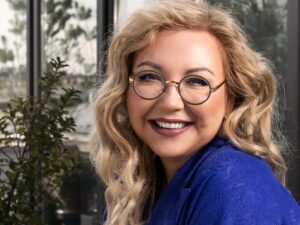 I write to you with a broken heart, but not a broken spirit.

None of us thought that we’d have to face a real and horrific war, the death of children, the killings of thousands of innocent people, the destruction of so many homes – homes that are just like yours or mine  – and the demolition of amazing cities and World Heritage Sites.

This is unbelievable, but real. A nightmare that became real.

Putin plans on occupying Ukraine in the first instance, but he’s already clearly stating that he intends to take over half of Europe… and then, what’s next?

I’m sitting at my desk here, in Cracow, a beautiful city where I studied. My university is one of the oldest in the world. Not too far from where I am, right next to our border, in Ukraine, bombs are being dropped. Universities and homes are being destroyed. Women are giving birth in basements. This is all so very shocking.

As we were just beginning to emerge from the global pandemic none of us thought that a situation like this could really occur in our part of the world – in Ukraine, a thriving country in the center of Europe, with ambitions to being admitted to NATO.  Instead we have a Russian criminal and dictator threatening our neighbours and the whole world with a nuclear war.

Not long ago when I tried to make the case with my friends in the US that we needed a much stronger partnership between America and Central Europe, because Putin is a huge threat, they looked at me as if I were a crazy pacifist. “Okay, he’s a lunatic, and a megalomaniac who thinks he’s a tsar… but fortunately he’s far away”, they said.

However, we here in Central Europe know what a ruthless dictatorship looks like. We need look no further back in history than the 20th century … we know how the Putins of the past and the present operate.

I write to you, because I believe that it’s not true that we can’t make a difference.  We all can, and we all must.  It is we who must shape the destiny of our lives and our world. We just need to believe in it and get on with the work.

We all thought that the 21st century would bring everyone further economic growth and a better life. During our last in-person M2W/ M2Moms Conference in New York City in 2019 we spoke extensively about our hopes linked to the rising role of women in politics, finance, business and science… we were inspired and envisioned a better world because of this.

I own a large advertising agency specializing in Marketing to Women called Garden of Words, which operates in Poland and in neighbouring countries. For years, we’ve been working with American brands and I hope to continue this work with many more in the future

Meanwhile…today, thousands of Poles, just like me and my friends, have had to learn new skills for this time of war.  We’re becoming front line specialists in helping our Ukrainian neighbours and their children. We already have over a million refugees in Poland (90% are mothers with children) and believe me – there will be many more.

Mothers who have fled their homes and travelled for hours on end or even days to get to the border. Sometimes with children or pets in tow, sometimes pregnant… and with only one suitcase. Just a few days earlier they were able to buy their favourite brands and could afford to plan vacations around the world or read newly published books… now they have escaped for their lives.

This is a huge challenge. To find a new place to live and seek medical care, education and jobs – it’s not about who is stronger and who is weaker, who is better and who is worse. It could have been us. These women and children have come to Poland’s door and it is up to us to help them enter their new reality with grace.

We in the free world are reminded that Democracy is not guaranteed forever. We need to work at it diligently, care for it lovingly…like a good mother.

Take care and I hope to see you all again, face-to-face in the better days that are surely coming. Think of us and the people of Ukraine.